Our democracy is suffering from a long due overhaul. Besides the frequent call for more countervailing power, there is a growing demand for new forms of citizen participation to resolve complex and long-running dossiers such as climate change, the housing shortage and escalating healthcare costs. As part of his NWA project, Frank Hendriks is investigating innovative forms of democracy that combine polling and votes. 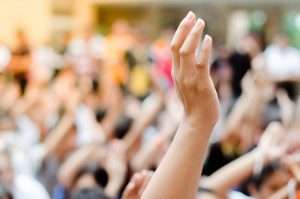 When asked about examples of the so-called hybrid democratic innovations that are the focus of his project, Frank Hendriks, Professor of Comparative Governance at Tilburg University, responds enthusiastically: ‘In Ireland, they have experimented with a combination of a referendum and citizens’ forum over the past decade. That was particularly noteworthy because it concerned abortion and gay marriage, both of which are controversial subjects for the rural catholic population. For years, politicians did not want to burn their fingers on these subjects. In this context, the hybrid democratic innovation did enable a genuine breakthrough. The citizens’ forum and the referendum complemented each other on important points.’

The citizens’ forum provided a first, preliminary step in the direction of the breakthrough. To mirror society as well as possible, 99 citizens were randomly selected for this forum. The citizens’ forum extensively gathered information by listening to experts, for instance, and came up with proposals for allowing gay marriage as well as legalising abortion under certain conditions. These proposals were subsequently put forward to the entire population by means of referenda. And both proposals were adopted by majority. ‘This really is a textbook case of a recent hybrid democratic innovation that used the citizens’ forum as a mini poll among a small group of respondents to thoroughly prepare for the referendum. As the citizens’ forum was widely reported on in the news, people were also well informed about the referendum beforehand. This meant that everyone was better prepared,’ explains Hendriks.

Improving Democracy
In the NWA project REDRESS (Revitalized Democracy for Resilient Societies), a broad consortium of researchers, government bodies and citizens’ organisations will itemise different forms of democratic innovations and place these within the context of the current debate in the Netherlands. ‘The Dutch system does not work badly in all cases,’ Hendrix is quick to add, ‘but there are many clear shortcomings in our current “polder model”: the Dutch consensus-based democracy. It is a stop-go system. Sometimes laws are approved quite unexpectedly, without having thought them through properly, and that gives rise to problems in their implementation. Conversely, there are intractable dossiers as well, for which scarcely any progress is made because politicians cannot or will not take the following step. Democratic innovations can contribute to an effective countervailing power and can also pick up signals from citizens that do allow politicians to make progress.’

Looking at the experiences in the Netherlands and further afield, the researchers want to make a sample card of the possibilities and limitations of different types of hybrid innovations. In which ways and under which conditions do they work or not? And then how can you best establish and embed these? ‘We will examine national as well as regional and local innovations. We are particularly interested in democratic innovations that increase the chance of useful signals from society being seen and heard. Signals that increase the probability that changes may take place in areas where stagnation is disastrous, and signals that develop an effective countervailing power where rushing ahead would cause problems.’

Design principles
In this process, the researchers will take a good look at design principles. How can you best organise and embed a hybrid democratic innovation? For example, is it wise to impose a turnout or outcome threshold for a referendum that is preceded by a citizens’ forum? When is it worthwhile to conclude a citizens’ forum with a multi-option referendum, and when is it better to hold a referendum that only poses a yes or no question? Not every approach works well everywhere. Hendriks: ‘In the case of Ireland, the two elements used were well matched with each other and the Irish system. A referendum that is legally binding is nothing unusual there; it is an established practice. In the Netherlands, a change in the constitution would be needed to make referenda that are legally binding possible, and that is a particularly laborious process. Such an amendment must be passed twice by both chambers of the Dutch parliament and must eventually be adopted by a two-thirds majority.’

Local politics as incubator
At the national level, organising a referendum or citizens’ forum is incredibly complex. Many people have become wary of referenda after the not particularly successful 2016 referendum on the approval of the Dutch Ukraine–European Union Association Agreement. However, things are different at the level of local government. ‘At the local level, we see many more experiments with democratic innovations’, says Hendriks. ‘Take Amsterdam, for instance, where people work with neighbourhood budgets that combine talking and voting in new ways. In an earlier phase, participative budgeting was often simply a pointless, small-scale exercise. Now it is normal that the wider population, like an entire district in Amsterdam, also votes about which projects will receive funding.’ A lot of innovations begin locally, agrees Hella van de Velde, who is the Knowledge Coordinator at the directorate Democracy and Governance and in this function represents the Ministry of Interior and Kingdom Relations in the research consortium. Citizens’ panels and fora or similar forms of participation are organised with increasing frequency for local subjects, such as neighbourhood design or municipal redivisions. The municipalities concerned then turn to us at the ministry with the question: “If we organise something like this, then what should we look out for?” This research project gives us the opportunity to build a knowledge repository on which we can base our recommendations in such cases.’

Therefore, Van de Velde was immediately enthusiastic when Hendriks approached her with the idea of a large-scale study into democratic innovation. ‘In our role as guardians of the democracy, we want to remain alert to new developments and obtain more insight into the effects of certain innovations. That requires systematic research into the effects of different instruments on the effectiveness of policy, the quality of the decision-making and the actual influence that citizens can exert on this. What is the right combination of instruments in which situation, and what do you need to look out for if you deploy such tools? How do you take into account democratic principles such as transparency and inclusiveness?’

Connection and involvement
Furthermore, the project comes at just the right time, says Van de Velde. ‘The Government Committee for the Parliamentary System under the leadership of Johan Remkes has examined the democratic system and made several recommendations for changes. And recently, the Brenninkmeijer Committee considered the possibilities to better involve citizens in climate policy. A substantial part of the population wants to be able to exert more influence on policy decisions. That is partly because citizens have become more empowered but also because the natural link between political parties and citizens has disappeared with the depillarisation of Dutch society. Increasingly fewer people are a member of a political party. As a result, politicians are keen to establish closer connections with the voter. This project is a fantastic opportunity to finally explore this subject in depth with a broad consortium.’

Besides observing and itemising existing democratic innovations in the Netherlands and abroad, the researchers will also conduct surveys and do experiments. They will, for example, present citizens with several different combinations of participation and voting so that they can analyse what might work. In doing this, they will pose questions such as: Would you participate in this? Would you accept the results of such a procedure? How would you like to be provided with the necessary background information? Which sources would you trust in this process and which not?

‘We will cast the net widely. However, the ultimate aim of the project is to learn lessons that apply to the Dutch situation’, elaborates Hendriks. ‘Which innovations could work in which ways and in which circumstances? Society has changed, but many democratic institutions have remained the same. With this project, we will provide impetus to the adaptive capability of Dutch democracy in a challenging and changing environment.’